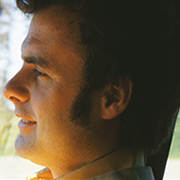 After I graduated from high school, my first full-time job was with the Ministry of Forestry in central British Columbia. The pay started at a munificent $182/month, although I, as a cruiser, made $212/month. Back then, that was great pay. I was able to buy a beer for 10 cents, and provide for my family.  Those years were the best years of my life. I learned a lot about wilderness survival. I lived in tents in remote areas, knowing that I was among the very few, the very privileged, to have walked these mountains and forests. It was my wilderness survival that would teach me how to survive in the business world.

This was also the most wonderful time of my life, full of adventure and fun mingled with some very humorous experiences.

A lot of the job revolved around "timber cruising" -- identifying and estimating volumes of trees in a specific area. Most of the employees in Forestry in those early days were people like myself, brought up in small towns with some basic outdoor experience. Of course, there were always some things that we did not know and had to learn, the easy or the hard way.

I was ahead of most of the guys. My father taught me basic wilderness and survival skills when I was very young. Originally from Denmark, when he came to Canada he was a hunter, then became a trapper, a good one. Even when my father went on to become quite an important businessman and entrepreneur in Prince George, for all his life he was first and foremost a great outdoorsman.

In those days, a person employed by Forestry started with the lowest job, a compass man, and worked his way up to a cruiser. The compass man had it tough. No matter where his uncaring compass pointed – over stinking bogs, up mountains, worming through thickets of stinging nettles, scrabbling down cliffs – he had to follow the compass line, exactly, without diverting a foot. The cruiser was the lordly guy who took the field notes, did the calculations, walked around the obstacles, had a very sharp axe to blaze trees on the line, and sent the unhappy compass man on his way, that way, every way through every obstacle in his way, all day.

The supervisors sat on top of the heap but usually they didn’t spend much time grubbing about in the field. Their shirts were crisp, their boots were clean and usually their air was one of superiority.

(Or over-educated, mostly in the office, and for most of the guys in the field, that was quite a distance away from us.)

Occasionally management would send us a supervisor right out of university, usually a "city guy" who had a forestry degree but no bush experience or outdoor skills whatsoever. Needless to say when such a paragon was assigned to a seasoned crew like ours, the welcome was usually cordial but not expansive, especially when he was obviously a rookie, a greenhorn and yet was in charge.

One cold winter, management sent me and my own compass man Greg off to a remote area to cruise a large tract of timber. It was a heavy snow-belt area, a two-hour journey by rail to the backside of nowhere. The train stopped, dropped us off, and rolled away. In two weeks we’d get picked up again with the expectation that the job would be completed. From the train we hiked into the forest for a couple of hours to the property to be cruised. We set up camp and got to work.

My long-time compass man was a guy named Greg, one of the best outdoorsmen I’ve ever met. He was a trapper who worked for the Forestry part time to make extra money. Greg was a rather taciturn fellow but when he did say something, it was meaningful. Greg was damn intelligent but he kept it to himself.

When Greg and I first teamed up, the knife routine drove me crazy but I kept it to myself. Prudently. After a few months, I sort of got used to it and once I got used to Greg and got to know him, I grew to like and respect him, zzzt, zzzt zzzt and all. I believe he felt the same about me. We made a pretty good team in the bush, strength balancing strength.

About a week into the job, we got a radio call from headquarters: “There’s a new guy on the way, coming up to supervise us and, by the way, he’s fresh out of university, he doesn’t have any field experience but he’s a good guy; go easy on him.’ 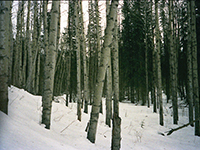 Next day Greg and I met the new guy at the train stop. We welcomed him -- after all, like the military, you respect the uniform and he was our supervisor. We put our snowshoes back on and took him back through the snowdrifts to our camp. He set up his gear and sleeping bag in our tent, we all sat down around the fire and had something hot to eat and drink. He did seem like a good guy but, judging by the way he kept glancing around, this was all pretty new to him.

Next morning, bright and early, it’s heigh-ho, heigh-ho and off we all go down the snowshoe trail and the two-mile jaunt to where Greg and I had left off cruising timber. We weren’t moving all that fast. Clearly, the new guy hadn’t yet learned the knack of walking on snowshoes. He was trying but boy, was he awkward.

He was also getting nervous and it was Greg who first twigged onto the reason why . . . the forest was alive, sort of.

It was a beautiful day, clear sky and crisp but the wind was up, the temperature was low (20 degrees below Celsius)  and the bush was dense with trees. Trees sway and can rub against each other. If the wood is cold and hard, two trees positioned just right, as the winds gust, those trees will ‘talk’ in a very strange, eerie way. The creaking is unworldly and, if you don’t know what you’re hearing, very weird and unsettling.

As we trudged along, the new guy kept looking around, not realizing that Greg and I had quietly noticed his nervousness and quietly nodded at each other. Up to now, the creaks and violin-like moans in the dense woods had been quite a distance away but now, as we went around one bend in the path, the wind picked up and, just a few feet off to the side, high off in the distance, there was a god awful REEECCCH . . .

Attack of the Fearsome Tree Squeak

Greg’s reaction and timing was impeccable. He bounded off the trail, hauling out his pistol in mid bound, hit the snow bank and began slamming off shots into the tops of the trees, all the while yelling at us to “Hit the ground! Hit the ground! It’s a tree squeak!! There’s a tree squeak coming!!”

As I mentioned earlier, Greg is a taciturn, quiet-spoken and seldom-spoken fellow. Prior to this moment, he hadn’t said much of anything to the new supervisor. Polite but not at all chatty. Now, to hear Greg suddenly start screaming like a banshee and begin blazing away – bang! bang! bang! – into the darkling forest, well, it was electrifying even for me even though I was sort of prepared for it.

I also dove for the snow, trying hard to hide my grin. Our poor supervisor, shocked and confused, spun around on his snowshoes for a second or two and did the sensible thing: He flopped face first into a deep drift and tried his best to burrow deep.

Greg was a great woodsman and a solid, unstoppable compass man but at that moment, I realized that he had missed his true calling. He could have been a hell of a stage actor. I was having a real hard time holding a straight face but not Greg. He reloaded his revolver, steadied, fired another round and then yelled back at the two of us: “Can you make it past? Can you make it past?!!”

Naturally, I yelled back that we’d give it a damn good try.

The Great Escape, With Snow Snakes 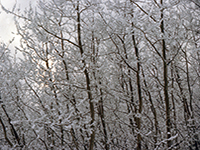 Greg kicked off his snowshoes. So did I. The supervisor, head cautiously poking up like a wide-eyed turtle, did the same. With his snowshoes in one hand, smoking pistol in the other, Greg wriggled back to us and we crawled along the trail, snowshoes in one hand, the supervisor’s heart likely in his mouth. Courageously, Greg stayed to the rear, lifting himself up once or twice to squeeze off another shot back down the trail, to warn off the terrible tree squeak.

Greg knew what he was doing. The tree squeak stayed put. About two hundred feet farther along the trail, we slowly got to our feet, put on our snowshoes and continued onward. Greg calmly, wordlessly reloaded his pistol. The deep woods can be dangerous, and the thing about lightning and tree squeaks, they can strike twice.

In spite of the danger posed by the tree squeak, we continued with a half day’s work, always keeping an ear open for those sneaky tree squeaks. However, the wind had died down, so no more warning sounds were heard.

We kept quiet. The supervisor followed suit but, boy, he sure looked uneasy. Greg and I were having fun. As we walked along, I noticed a long, snake like indentation in the snow, about 20 feet long, caused by the snow from the tree branches falling over a hidden creek. I pointed it out to Greg. “No wonder we ran into a tree squeak. A snow snake came through, no long ago and by the looks of it, it’s a biggie and it could still be around.”

With a grave look on his face, Greg silently checked his pistol, touched the sheath of his big bowie knife. From the corner of our eyes and to our straight-faced amazement, the supervisor became even more frightened. Normally, this would be about the time you’d start laughing and let the poor guy in on the joke but, Greg was a damn good actor and I wasn’t about to let him down.

The supervisor led the way towards camp at a very fast pace, keeping a wary ear and eye open for snow snakes and tree squeaks.

The Last Claw . . . the Gilaghooger

It was about a two-hour walk to camp. We were making good time, getting real close and I thought, “Why not try and make it three for three?” Surely the guy would figure out we’ve been pulling his leg all along and then we could all laugh together.

I looked at the guy. The guy looked at Greg and I. Greg gave him a brief, confirming nod. We both kept our faces straight, Greg far better than I. To my utter amazement, the guy just stared at us and seemed to get even more uneasy: God, what would happen if we ran into a, gulp, a big bull gilaghooger?

That afternoon, promptly at 4:00 p.m., the train made its brief stop on its way back to the big, safe city and our guy was aboard it. Me, I stayed on with the Forestry Department for some years after that memorable encounter with the tree squeak and snow snake (but, thank God, not the gilaghooger) but I never again chanced upon that young, university-educated forestry supervisor.

Perhaps an urban gilaghooger got him . . . ?