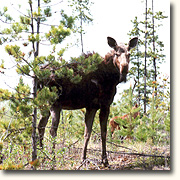 In the 45 years I have spent hiking and camping in the great outdoors, I have encountered many animals of various species. My father was a trapper in the early thirties and he taught me at an early age what to watch out for at different times of the year regarding the feeding habits and moods of animals in the wilds. So over the years I have developed a sixth sense as to when and what animal I'll meet and which animal wants to have its picture taken and which one wants to be left alone. As a result I have assembled a wonderful library of wildlife photos taken over the last 20 years.

In the spring of this year my ranch foreman, Chris, and I were inspecting a 400 acres parcel of property we are developing north of Mackenzie. It is a beautiful property, on a bench with an incredible view of the snowcapped mountains, and with a good sized clear, snow-fed creek running through it. We had already seen a couple of moose that morning, when a few hundred yards to the north of us I saw a magnificent cow moose with two very young, healthy calves. 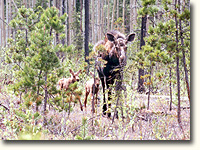 I had to take some pictures of this area for the surveyors who were laying out a subdivision plan, so Chris headed back to the truck and I headed for the bench to get some photos. Still at a distance I stopped and watched her. She had no problem with me and kept eating some willow, but watching me all the time. I then brought my Nikon up and pushed my automatic focus to take her picture. When the motor started focusing the camera, she immediately put her ears back and the hair stood up on the back of her neck. I took the picture, then just stood there, not moving. Her ears came up and her hair came back down. I looked at my Nikon and tried to figure out how to set it from automatic to manual so the motor wouldn't "whirr". While I was doing this, the moose just kept eating her willow diet, not the least bit concerned about me. After many frustrating minutes I knew I wouldn't figure out how to turn off my automatic focus without the instructions, and they were at home. Still I was determined to get another picture; I thought she might let me do this now. I was wrong. The minute she heard that motor, back went her ears and up came the hair. 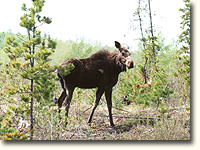 But this time she was really angry and came at me full charge. I quickly took one more photo and ran! Most times when I am confronted by a bear or moose I stand my ground hen step backwards slowly, one step at a time until I'm clear. But in this case I had no time. I figured if I ran fast enough she would stop the charge. Wrong again. She was gaining quickly. My first thought was to try and make it to the truck and get in. I was running and yelling for Chris to open the truck door but he couldn't hear me because he had the motor running and was checking something else. I soon realized even if he could hear me and got the door open, I still couldn't make it in time. I was in a logged area and saw one small poplar tree, for which I headed, intending to climb it as fast as possible. That was probably the fastest 1000 yard dash I had done since the 60's when I ran the "440" for the Vancouver Olympic Club. 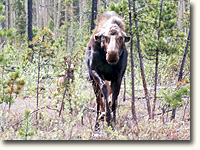 Halfway to this tree I realized that I wasn't going to make it, so I had to find a second escape route…..fast. Just up ahead I saw some windfall with a small clump of spruce trees. I dropped my camera, covered my head and face with my arms and dived head-first into the middle, just as she reached me. I hit a log with my shoulder, but I landed safely in the middle of the thick brush. I slowly sat up, looked through the dense brush and there she was, just standing there watching me. Her ears were up, her hair down and she was no longer mad. She stood there less than a minute and then trotted back to her calves.

I crawled out of my brush pile, carefully found my camera and jogged back to the truck. I startled Chris. "How the hell did you get here so fast? Only a minute ago you were on that hill over there" he said, pointing in the opposite direction. While rubbing a very bruised shoulder, and wiping a lot of sweat off my face, I told him my story.

Moral of the story: If photographing an animal in the wild, use a good zoom lens and keep your distance