Emergency Food Sources- How to Catch a Grouse

What if you are in an emergency situation in the middle of nowhere, with no weapon available, and find that you need to eat something to survive? Out in the wild, there are many food sources available. All you need to do is look. While porcupine has traditionally been an old trapper standby, their numbers have steadily diminished over the past several years. The next best thing though, is the grouse. They are a common bird to find in the back country, and they make excellent eating.

Spruce Grouse, also known as “fool hen grouse”, are the easiest ones to catch. Found throughout Canada, and the northern United States, they are known by their dark black or grayish brown markings, with the male’s distinguishing characteristic being a red marking under his eye. A little larger than the common crow, the Spruce Grouse are widely considered the stupidest grouse in the entire grouse family.

In my dealings with Spruce Grouse, when they see a potential threat approaching, they will fly up into a tree, although not very high, sit on a limb, and watch the potential threat. They depend on their colouring for camouflage and their ability to fly away from danger for protection from predators.

I have used a technique for some forty years, which I found while I was writing this story is known in Labrador as “slipping”. I can catch a grouse with a string, piece of wire, or even a shoelace. When I am walking in the forest, I watch for grouse sitting on low tree branches. I make a noose with my shoelace, find a very large pole or branch, cut the limbs off the pole, and put the noose on the end. Then, walking very slowly under the tree, I begin to chirp like a grouse. I slip in underneath them, and slowly move the pole with the noose underneath the grouse, still making chirping calls. I slowly put the pole in front of the grouse’s head, and then make high pitched loud grouse calls. The grouse, similar to a chicken, will stretch its head right out through the noose that is hanging there to see what is going on. I pull it straight down, the noose tightens around his neck, and then I have captured a live grouse.

But what if you don’t have a pole? Believe it or not, I have caught grouse with my bare hands! 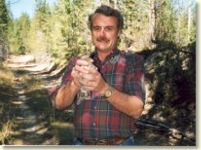 Several autumns ago, I was on a trip with my wife, traveling down a dirt road in Northern British Columbia. Now, we had been discussing for a number of years whether or not I could catch a grouse with nothing but my bare hands. I said I could. She wanted proof. It just so happened that on this trip we came across a mother grouse and a flock of fairly large chicks. The grouse took off from the road, and flew up into the trees about 200 feet away. I thought that this was a good time to prove my story.

I said to my wife, “I’m going to show you that I can catch grouse with my bare hands, so I suggest that you should pull out a good book, because this could take a while.”

So I stopped the truck by the side of the road, and looked for signs for where they had been feeding. After I identified where they had been feeding, I lay down motionlessly flat by the side of the road. I watched the grouse in the trees, which were about 200 feet away, and I then started making sounds like that of a grouse chick. After a while, a couple of the chicks flew back down to the seeds under the tree, and they were followed shortly thereafter by the mother grouse and the rest of the chicks. They began to feed again, but were being very cautious. Over the next hour, I slowly inched my way towards them flat on my stomach, continuously making grouse calls. 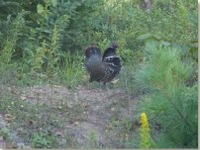 With painstaking patience, I got in between the grouse and lay motionlessly still, but still making my grouse calls. Finally, one of them came close to my right hand. I moved my hand very slowly towards the chick, and, once he was within range, I grabbed the chick by its feet.

I got up, held the chick with both my hands, and I walked back to the truck. I proudly displayed the chick to my wife, and asked her to take a couple of pictures. We then released the unharmed chick, who flew back to rejoin his family in the trees.

There are other emergency food sources other than the grouse. Check back with niho.com for more stories on tips to catch ptarmigans, squirrels, and rabbits.