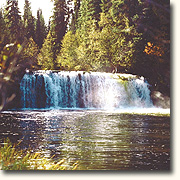 On a crisp fall morning last October, with the golden red leaves from the poplar trees reflecting on a calm, slightly misty lake, I took off for a four day fishing trip accompanied by a good friend, a master fly fisherman who has fished in many good streams around the world, and his nine year old son. We flew directly from Nimpo Lake, located in the Chilcotin, to Euchiniko Lake, which is part of Blackwater River system, located just north of the Chilcotin, by Fraser Plateau, and is also known as The Kluskus. The flight in a Beaver, one of my favourite planes because of it's safety record, and it's power (which gives short take-off ability, thus giving it access to more lakes), took just over half an hour. We landed on slightly choppy water on the west side of Euchiniko Lake. After watching the Beaver depart over some low rolling hills to the south, we assembled our 13 ft zodiac in preparation for the trip down the river.

Before starting our journey down the Blackwater, we decided to hike a few miles west, back along the river on a well cut out path to a beautiful 30 ft. waterfall which emptied into a large crystal pool. 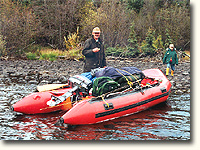 We fished this pool for a while and then fished a few other pools on our way back towards the lake, using dry flies on a floating line. We tried a number of different flies matching them to the flies landing on the river, but except for a few small strikes, we did not have much success. After a few hours of casting we returned to the lake, launched our boat and then worked our way along the north shore, along some lily pads, casting as we went, all the while looking for a good camping spot. We made camp for the night on the north side of the lake, a spot which offered dry firewood and a thick mossy ground cover. Next morning, after a hearty cowboy breakfast consisting of smoked bacon, eggs, toast, and black coffee, cooked over an open fire, we broke camp and slowly trolled our way to the start of the river, sometimes drifting, other times using our small motor. We headed downstream, fishing several pools along the way, again using dry flies on a dry line. We caught and released a number of good-sized trout, both in the pools and in the faster water. Most of the river this day was fairly slow water. 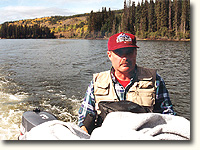 Towards evening we found a beautiful camping spot on a bank, in a field overlooking the river, a few hundred yards from a log cabin used by cowboys for trail rides. The trail right beside our camp was the historic Mackenzie Trail, now used by hikers and horses, which eventually leads to Bella Coola. After setting up camp, we put on our waders, walked to the river and fly fished in several large pools below some fairly fast rapids. Fishing here was excellent and it didn't take very long to catch a number of trout, all of which we released, except for three we kept for supper. We pan fried these over hot coals in butter, with some seasoned salt and pepper, and sprinkled with some finely chopped onion and fresh lemon juice. Along with the fish we had corn and baked potatoes wrapped in tinfoil, accompanied by a bottle of Chablis which we chilled in the river….a great meal. 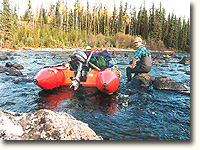 After a good night's sleep and another hearty breakfast, we continued on our way down the river, which, for the most part of this day was slow moving (except for the odd set of rapids). The scenery was beautiful. To the south were some fairly high rolling hills, mostly consisting of open fields with patches of poplar stands where we saw a herd of horses and several black bears foraging for ants and roots. There were also a few abandoned log cabins and a couple of still-used cabins along the way. We had now covered half our total distance and, except for a few spots, the water this day was very slow and not the best for fishing.

The second half our trip was much more active. There were many sets of rapids emptying into large pools, with some of the best fishing I have experienced for many years. We caught trout on both dry and wet flies, and released all except enough for supper. At one spot in some faster water I used a small barbless crocodile lure and except for a couple of misjudged casts, landed a good sized trout every time. One problem we had not anticipated was the extremely low water at this time of the year. We had a very difficult time in a number of places bringing our zodiac through the rapids and some sandbars. We had to manoeuvre the boat around huge rocks, in very shallow waters and, in many cases, we had to pull and push out boat for several hundred yards through these areas. We spent most of one day working our boat in this manner. At the end of this full say we had not travelled many miles at all, and finally, we had only fifteen minutes of daylight left to set up a quick camp. 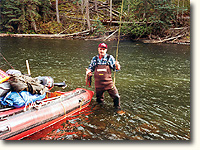 The site was not the best in the world because there was only enough space to put up one of our two tents, and the ground was very rocky. We ate supper by lantern light before retiring for the evening.

We got an early start the next day and for most of the morning it was back to pulling and pushing our boat over and around the rocks and sandbars, in mostly fast water and small rapids. We reached deeper water around noon and were able to manoeuvre our boat through the obstacles with only a little shoving and pushing. By mid afternoon we reach Kluskoil Lake where, on the north shore, we saw a grizzly sow and her two cubs foraging for food on the beach. We then had to continue through to the other end of the lake, pack up our zodiac, and gear into cases, and be on time for the float plane.

The scenery along the entire trip had been spectacular. It consisted of open countryside treed in stands of poplar, large grassy fields and rolling hills. The river had it's own distinct character - slow water, fast water, large pools, rapids and lots of wildlife. The fishing had been excellent but I recommend not going too late in the year or you will spend more time pushing and pulling your boat than fishing.